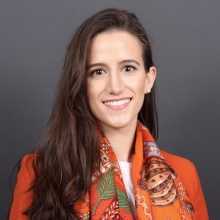 Almudena is an Associate Researcher in the Space Security and WMD programmes at UNIDIR. Her research focuses on space security and missiles.

Prior to joining UNIDIR, Almudena was a Research Assistant at Georgetown University Law Center, where she is currently an S.J.D. (Ph.D equivalent) candidate. She also holds an LL.M. in National Security Law from the same institution, where she was the recipient of Georgetown’s Thomas Bradbury Chetwood, S.J. Prize for the most distinguished academic performance in the programme.

Almudena received her LL.B. from the University of Navarra. She is admitted to practice law in Spain, and prior to her studies at Georgetown, she was a practicing attorney at Spanish law firm Uría Menéndez, where she specialised in international arbitration and litigation. She speaks English, Spanish, French and German.