Publication
The Human Element In Decisions About The Use Of Force 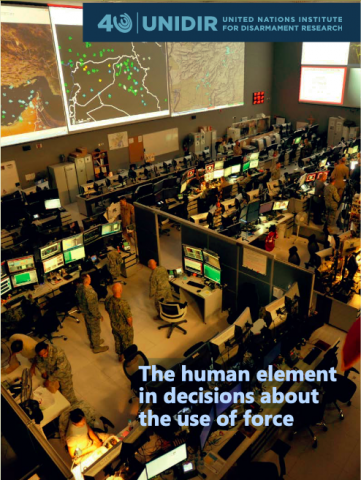 The Human Element In Decisions About The Use Of Force

Since governments began expert meetings on lethal autonomous weapons systems (LAWS) in the context of the Convention on Certain Conventional Weapons in 2014, maintaining control over emerging technologies in the area of LAWS has been one of the main shared objectives.

States have suggested maintaining human control over weapons, the critical functions of weapons, attacks, the targeting process, and (final) decisions to use force. Although most agree that human control should be more meaningful than the mere possibility of aborting an attack at the final moment, the international community is struggling to determine how the human role in the use of (lethal) force should be defined and implemented.

This infographic offers a framework of the human role in military decision-making – at the strategic, operational and tactical levels – that may guide deeper discussion on the military and legal aspects of human control within the LAWS debate.

The purpose of this infographic is two-fold: 1) it demonstrates how critical decisions about the use of force are taken at various levels and how they may influence one another, 2) it provides some key legal considerations for decision-makers at various stages in the process.

Now available in French and Spanish!

The Human Element In Decisions About The Use Of Force