Publication
The United Nations, Cyberspace and International Peace and Security: Responding to Complexity in the 21st Century 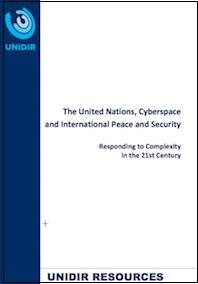 The United Nations, Cyberspace and International Peace and Security: Responding to Complexity in the 21st Century

ICT-related issues have been on the agenda of the United Nations for almost two decades, driven by both the positive benefits and the malicious purposes they can be leveraged for. This report is concerned with the UN’s response to the latter in the context of international peace and security. It focuses principally on the norm-setting work currently underway within the General Assembly. It outlines where progress has been made in developing a normative framework to shape behaviour in the use of ICTs and ensure stability of the ICT environment, highlighting where challenges and on-going sources of disagreement lie.

The report also discusses linkages and complementarities with other non-UN processes, as well as linkages and complementarities with other items on the UN agenda, directly or indirectly linked to international peace and security. Finally, it identifies how the UN, particularly the UN Secretary-General, might play a role in raising awareness of, supporting and strengthening this on-going work.

The United Nations, Cyberspace and International Peace and Security: Responding to Complexity in the 21st Century