Publication
Lock them Up: Zero-deployed Non-strategic Nuclear Weapons in Europe 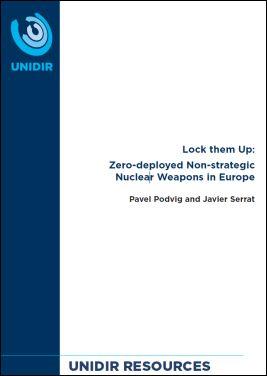 Lock them Up: Zero-deployed Non-strategic Nuclear Weapons in Europe

It is difficult to imagine a scenario in which “non-strategic” or “tactical” nuclear weapons would be deliberately used in a conflict in Europe. However, these weapons are still present on the continent and complicate efforts to strengthen the European security architecture. Moreover, these weapons pose potential risks of miscalculation, inadvertent escalation, or accidental use in a time of crisis. Yet, today there is no mechanism to reduce or eliminate arsenals of these weapons or to exclude the catastrophic scenarios of inadvertent use. This reality raises the imperative to develop a practical proposal that would make sure that nuclear weapons are not introduced into any potential conflict in Europe and that would lay the groundwork for eventual reductions in non-strategic nuclear arsenals.

This paper presents a proposal to ensure that all such weapons remain non-deployed during peacetime, codifying current practices into a legally-binding, verifiable arrangement—thereby reducing the risks of nuclear war breaking out in times of peace and placing safeguards against nuclear escalation in times of crisis.

Lock them Up: Zero-deployed Non-strategic Nuclear Weapons in Europe