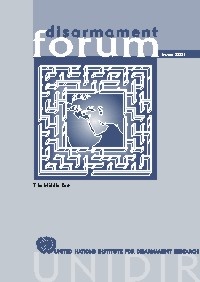 The stalemate in the Middle East Peace Process has taken a drastic turn for the worse in the past months. With violence exploding, hopes for positive steps towards a Palestinian-Israeli accord in the near future are all but extinguished. How will this deteriorating situation effect the rest of the Middle East? What are the near to mid-term prospects for the region? Whatís happening with ACRS and what, if anything, are its possibilities? Topics such as the international communityís wavering equivocations on how to deal with Iraq, recent elections throughout the region and their implications, and the indisputable strategic importance of the Middle East demand a new examination through a regional security and disarmament lens. This issue of Disarmament Forum will offer a deeper exploration of how and why the Middle East constitutes such an important challenge to arms control and disarmament.