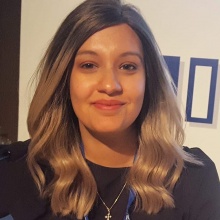 Hana Salama is a Researcher in the Gender and Disarmament programme. She is the co-author of Women Managing Weapons, a report which investigates the previously unexplored area of women’s participation in Weapons and Ammunition Management (WAM). Currently Hana is leading several projects on gender in conventional arms control and disarmament. She is conducting a study on gender responsive arms control in conflict prevention and investigating good practices for gender equality in decision making and implementation of conventional arms control and disarmament.

Prior to joining UNIDIR Hana was a consultant at the Small Arms Survey where she published several papers on armed violence monitoring in the Sahel and Sub-Saharan Africa. She also worked with the Oxford Research Group where she spearheaded a process which led to the creation of the first set of international standards on casualty recording.

Her areas of expertise include gender analysis, conflict prevention, small arms control and disarmament, civilian casualty recording and protection of civilians in conflict. She speaks English, French and Arabic.