The European Union (EU) has long been a strong supporter of multilateral efforts to tackle illicit small arms and ammunition proliferation. It is more than 20 years since the EU adopted the Joint Action of 17 December 1998, laying the foundations of European priorities for international efforts to tackle the international illicit small arms trade. Critically, and in contrast to many of the other regional approaches on this issue being adopted across the world at the time, the EU’s approach sought not only to contribute to efforts to address the problem at the multilateral level, but also to support efforts in other regions. Therefore, the EU’s support for the development and implementation of regional and sub-regional instruments and initiatives to tackle illicit small arms proliferation is notable.

This week marks the third anniversary of the adoption by the Council of the European Union of the EU Strategy Against Illicit Firearms, Small Arms & Light Weapons & Their Ammunition on 19 November 2021. The Strategy continues to promote the EU contribution to multilateralism, as well as support for other regional organizations to counter illicit small arms. At the same time, the Strategy elaborated in more detail than its predecessor, the 2005 Strategy to combat illicit accumulation and trafficking of SALW and their ammunition, on the threat posed to the Union and its Member States by illicit small arms proliferation and misuse. For example, the explicit reference to firearms in the Strategy’s title reflects recent experiences in the Union of marauding terrorist firearms attacks and the increased use of firearms by organised crime groups and urban crime gangs in its Member States. 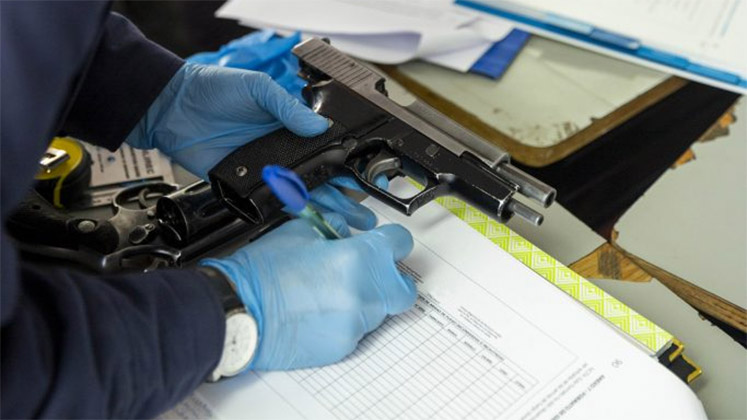 In response to the nature of such threats, the new EU strategy promotes new areas for technical assistance at all stages of the life cycle of small arms and ammunition, expanding the focus from stockpile management, marking, record-keeping, and tracing into production methods (such as 3D printing or polymers) and the reactivation of small arms that are at the end of their life (i.e. deactivation standards). The Strategy also pays more attention to the issue of ammunition, signalling the growing relevance of support for multilateral efforts to strengthen through-life management of ammunition.

As one of the leading donors in the field, the EU has in recent years increased the scope and scale of its international assistance programming for other regions and sub-regions, not least through a series of Council Decisions that provide regional organisations with funding for technical expertise to support the implementation of global and regional small arms and ammunition control instruments (including the Western Balkans, Latin America and the Caribbean, the League of Arab States, and Macedonia and Georgia). At the same time, this funding is not only intended to address regional challenges, but also to promote norms enshrined in multilateral instruments and processes. Therefore, the expectation is that other regional organisations will also promote adherence to international human rights and humanitarian law, ensure small arms programming supports gender mainstreaming, and contribute to achievement of the Sustainable Development Goals.

The latest EU strategy strongly supports action in its neighbourhood, singling out for special attention the Roadmap for a sustainable solution to the illegal possession, misuse and trafficking of Small Arms and Light Weapons (SALW) and their ammunition in the Western Balkans by 2024. The Strategy highlights this sub-regional approach as a potential model or inspiration for countering the illicit trafficking of small arms, firearms, and ammunition in other regions. This sets the EU apart from other regional organisations on the issue of small arms control, as the EU not only sets standards and regulations for its own Member States on life-cycle weapons and ammunition management, but also encourages and provides support for other regional organisations to pursue regional and sub-regional approaches.

In conclusion, the most recent EU strategy to tackle the illicit proliferation of small arms and ammunition clearly shows both internal and external influences on the development of its strategic approach in this domain. Yet the EU remains a special case in that it provides support and international assistance efforts not just in support for promoting multilateral norms and standards but also as a regional actor that supports and promotes regional approaches to combat and eradicate the illicit small arms trade in other regions.