Gender equity and the nuclear sector: a Canadian perspective

Safety and security are imperative in the nuclear business, and having diverse perspectives around the table brings more questioning attitudes, less groupthink and therefore better safety outcomes. Sadly, the nuclear industry in Canada falls short in terms of gender diversity.

In a way, this is a reflection of broader trends. For instance, only about 35% of global university graduates in science, technology, engineering and mathematics (STEM) disciplines are women. In engineering, the figure in Canada is even lower, standing at about 20%. But the problem starts much sooner, as gender stereotyping begins to tell girls very early on that certain careers are not for them, and studies show that they have internalized this idea as early as the age of six. 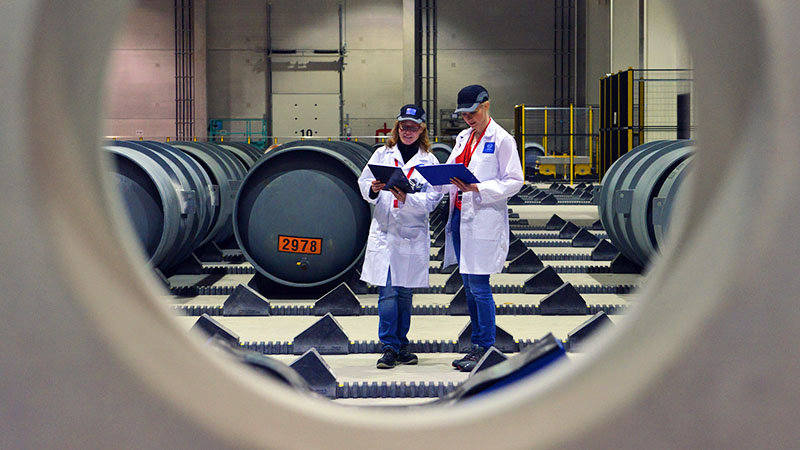 As if this issue of bias weren’t bad enough, the nuclear industry is also suffering from an ageing workforce. We can, however, implement solutions to this somewhat gloomy picture. With a clearly visible need to attract and retain top talent in our sector, let’s not deprive ourselves of access to half the talent pool through systemic and unconscious bias. We need to encourage girls and young women to pursue STEM studies followed by rewarding, lasting STEM careers.

Nuclear regulators can lead by example with policies and programs they set for their organizations to increase gender equity. Because we have influence, we can also pull levers to encourage similar policies among licensees. At the CNSC we have incorporated in five ways the principle of gender equity, diversity and inclusion (EDI) into how we carry out our mandate.

1. Applying a Gender-based Analysis Plus lens to our work by using Gender-based Analysis Plus (GBA+), which is a tool that applies a gender lens to all of our programmatic activities. It helps us recognize systemic and unconscious biases in our workplace so that we can develop policies to remove them. This encourages those who might have otherwise held back to join, participate and contribute fully to our work. People from broadly varied educational and cultural backgrounds bring new perspectives, which expands our capability to do our work even better.

2. Using gender-specific data to inform strategic policy making to drive informed policy and programming decisions. In 2021, the Nuclear Energy Agency (NEA) undertook one of the first global efforts to obtain gender-specific data on women’s participation in the nuclear sector by surveying 8,000 women in more than three dozen countries. We have worked closely with the NEA to develop policy recommendations related to gender equity in the nuclear sector in three thematic areas: attract, retain and promote. I am looking forward with great anticipation to OECD countries and others embracing these recommendations.

3. Driving efforts to study the differential effects of ionizing radiation on women. We have initiated research on the differential impact of low-level radiation on women. Animal studies and epidemiological studies on atomic bomb survivors have clearly shown that ionizing radiation affects males and females differently. Data indicates that radiosensitivity in females is higher. Canada recognizes that epidemiological studies on effects of exposure to low-level radiation – typical of most nuclear applications today – have not considered sex differences in past research. Studies have usually looked at groups of men from male-dominated industries – uranium mining or nuclear power – and this leaves big gaps in our knowledge. So, to deliver full protection to everyone we must continue to refine our knowledge of how radiation affects women and men differently. Along with Health Canada, the CNSC has created a partnership called COHERE (the Canadian Organization on Health Effects from Radiation Exposure), where we use a gender lens to assess the impact of low levels of radiation exposure. The International Commission on Radiological Protection is also a contributor to this work.

4. Leading initiatives to increase women’s participation in nuclear. We drive specific initiatives – within the CNSC, the Canadian nuclear sector and at international levels – to improve the participation of women in the nuclear sector. I co-chair the International Gender Champions’ Impact Group on Gender Equality in Nuclear Regulatory Agencies, which consists of more than 30 global nuclear regulators. Key initiatives are to make a public commitment to achieve gender equity, share best practices and collect consistent data on gender in the nuclear workforce. I also co-chair the Driving Advancement of Women in Nuclear initiative – known affectionately as DAWN – for the Canadian nuclear sector. Our priority areas include bridging the confidence gap, the representation gap and the succession gap. In less than three years, we have made remarkable progress.

5. Encouraging girls and women to pursue careers in STEM fields. We have initiatives to encourage young girls and women to consider STEM careers. For many years I’ve been a passionate advocate and champion for STEM careers for young women. While the CNSC has many initiatives in this area, one that’s much anticipated is coming up in Spring 2023: the first in a series of the very successful Mentoring Workshops the NEA conducts, which we will be holding for young Indigenous women in Canada. Mentoring delivers attention and encouragement, and sometimes that’s all you need to spark interest in something which could bring a lifetime of reward and satisfaction.

It’s not just for regulators: everyone in the nuclear field should be committed to striving for gender equity.

Rumina Velshi is the President and CEO of the Canadian Nuclear Safety Commission (CNSC), Canada’s nuclear regulator. Rumina has been with the CNSC since 2011 – first as a Commission Member until her appointment as President in 2018. She is currently the Chairperson of the International Atomic Energy Agency’s Commission on Safety Standards. She has extensive technical, regulatory and adjudication expertise in the energy industry. Rumina was one of the first female nuclear energy workers in Canada and has worked in various capacities at Ontario Hydro and Ontario Power Generation, the electrical utilities in the province. She also previously served as a Board member of the Ontario Energy Board, the economic regulator of the province’s electricity and natural gas sectors.