Directed energy weapons: a new look at an ‘old’ technology

Directed energy weapons (DEWs) are a type of electromagnetic or particle technology which use energy, as opposed to a physical projectile, to strike a target. DEWs have been under development for many decades. Despite initial enthusiasm and research around this technology, progress on DEWs has faced a range of technical and operational challenges. Yet, in recent years, the technology has matured and there has been an increase in funding of these capabilities.

Cognisant of their attractiveness as a weapon, as well as their potential threat and impact on international security if used maliciously, DEWs are included as one of the technology areas within the UN Secretary-General’s 2021 report Current developments in science and technology and their potential impact on international security and disarmament efforts. 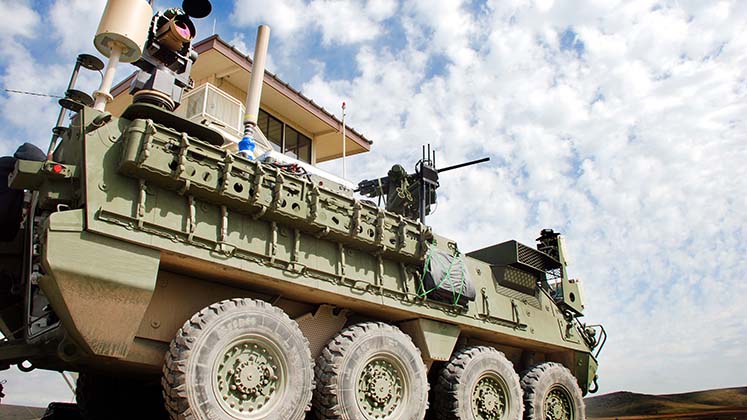 A five-kilowatt laser mounted on an armoured vehicle (public domain)

What exactly are directed energy weapons?

The term "directed energy weapon" is used as a catch-all, to encapsulate a number of different technologies under one umbrella. These technologies are all at different levels of maturity, therefore talking about DEWs as a whole omits important nuances between the different types. There are three main systems which come under this umbrella term:

These systems are used in different circumstances and therefore lead to different effects, which can be either lethal or non-lethal.

Lasers, in particular high-power ones and particle beam systems, can lead to the disruption and destruction of equipment, whereas low-power lasers can mainly dazzle systems, such as sensors, including those on satellites. High-powered microwaves can degrade and damage electronics, and as such can be used to counter threats from uncrewed aerial systems. But they could also be used to disrupt a wide range of electronics, from smartphones and motors to command posts. Finally, millimetre waves can be used as an anti-personnel area denial weapon; while not lethal, this system can produce a burning sensation on the skin.

While low-powered lasers and radio frequency-based systems are much more frequently used in the field, high-powered lasers are beginning to reach the technological maturity required to be used operationally, whereas particle-beam weapons remain far from that point.

DEWs are of increasing concern given their low operational cost per shot, their use of shots that travel much faster than those from conventional weapons and are unaffected by gravity, and their ability to launch silent and invisible attacks. Additionally, radio frequency attacks, in particular from high-powered microwaves, can be hard to attribute. While DEWs would not replace conventional weapons, they could – and to some extent already can – complement existing capabilities.

Yet, DEWs are not without their operational limitations. Taking high-power lasers as an example, their effect on a target, unlike that of conventional weapons, is not instantaneous but rather cumulative – several seconds are needed before damage is done. Weather, such as rain or clouds, can also impact the effectiveness of lasers. Finally, the target needs to be visible for the laser to be effective. With regards to radio-frequency systems, their optimal use also depends on certain weather conditions. Microwaves or millimetre waves are also prone to more dispersion than lasers and therefore, unlike lasers, are not able to send a directed beam, and the waves can be hampered by conductive material.

Does anything need to be done about directed energy weapons?

A range of countries are known to already possess or be developing DEWs, and some are even using such weapons in the field. For example, the United States recently released a call to develop a next-generation high-power laser and has deployed microwave technology. China and Russia are known to have developed mobile laser systems, and Israel has tested an airborne laser system.

One type of DEW, namely blinding weapons, has been banned as a means or method of warfare since the 1995 Protocol on Blinding Laser Weapons, under the Convention on Prohibitions or Restrictions on the Use of Certain Conventional Weapons (CCW). This protocol aims to avoid the “unnecessary suffering or superfluous injury” caused by lasers which could cause blindness.

Yet, this protocol is primarily focused on the humanitarian implications of one type of effect caused by lasers. To date, there has not been any further structured debate on DEWs more broadly, neither with respect to humanitarian law beyond blinding lasers nor on their impact on wider international security. This is despite certain radio frequency systems already being used and laser weapons nearing operationalisation. Given the increase in development and use of these different weapon systems, a closer examination of these systems in a multilateral setting may be timely. This could for example take place during domain-specific discussions such as the open-ended working group on reducing space threats, to better understand what these systems mean for international security, to examine the consequences of their misuse, and to put in place adequate measures in response to the risks these weapon systems could present.

Sarah Grand-Clément is a researcher working across our programmes on Conventional Arms and on Security and Technology. Her areas of expertise include international security, counter-terrorism, futures methodologies, and how new and emerging tech impacts on defence and security.