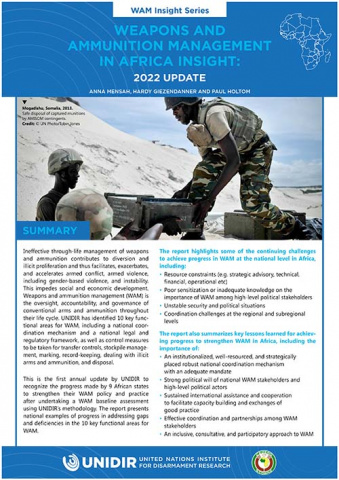 UNIDIR has identified ten key functional areas for WAM, including a national coordination mechanism and a national legal and regulatory framework, as well as measures to be taken for transfer controls, stockpile management, marking, record-keeping, dealing with illicit arms and ammunition, and disposal.

This is the first annual update by UNIDIR to recognize the progress made by nine African states to strengthen their WAM policy and practice after undertaking a WAM baseline assessment using UNIDIR’s methodology. The report presents national examples of progress in addressing gaps
and deficiencies in the ten key functional areas for WAM.