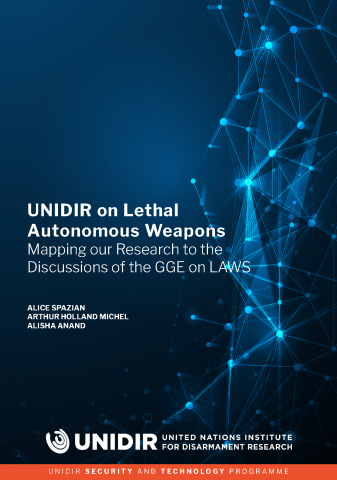 The United Nations Institute for Disarmament Research has been studying the weaponization of increasingly autonomous technologies since 2013. Over this period, the Institute has produced 15 in-depth studies on this issue. These projects have largely focused on considerations that the Group of Government Experts (GGE) on emerging technologies in the area of lethal autonomous weapon systems (LAWS) has identified as having particular relevance to its development of consensus-based recommendations on a potential normative and operational framework for LAWS. To support the GGE’s ongoing discussions in 2021 and beyond, this report summarizes a range of key contributions that these studies have made in these areas. Each section provides a brief summary of the topic as it has been discussed within the context of the Group, followed by a summary of our relevant findings sourced to the reports in which those findings are presented.

Germany, the Netherlands, Norway and Switzerland, and by Microsoft