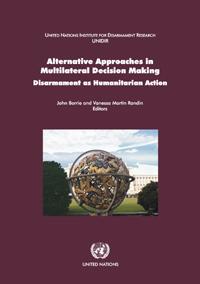 Multilateral arms control and disarmament negotiations have achieved scant success in recent years, despite pressing political imperatives. Cases in point: the Conference on Disarmament in Geneva has been paralyzed since 1997, negotiations on a binding verification protocol to strengthen the Bacteriological and Toxin Weapons Convention failed in 2001, and obstacles remain to regulating anti-vehicle mines and cluster munitions within the framework of the Convention on Certain Conventional Weapons (CCW), despite mounting evidence of their deleterious humanitarian effects.

While orthodox approaches have struggled, the progress that has occurred in disarmament over the last decade tends to have been accompanied by the input and inclusion of humanitarian approaches. The 1997 Anti-Personnel Mine Ban Convention is the best known of these achievements, but humanitarian perspectives also contributed to agreement in 2003 of a CCW protocol on explosive remnants of war, and in developing a UN Programme of Action to curb illicit trade in small arms and light weapons in 2001, as well as its follow-up.

Alternative Approaches in Multilateral Decision Making: Disarmament as Humanitarian Action critically assess contemporary multilateral arms control and disarmament negotiating processes, for instance, on the role of "political will" in deciding outcomes. Starting from the premise that traditional practices and presumptions are insufficient to address real-world problems deriving from the possession, use or threat of use of weapons, the volume proposes recasting multilateral arms control and disarmament challenges and responses to benefit also from humanitarian approaches.

This publication is the first of a three-volume series that analyzes and proposes practical ways in which humanitarian and human security approaches can benefit negotiators in multilateral disarmament and arms control.