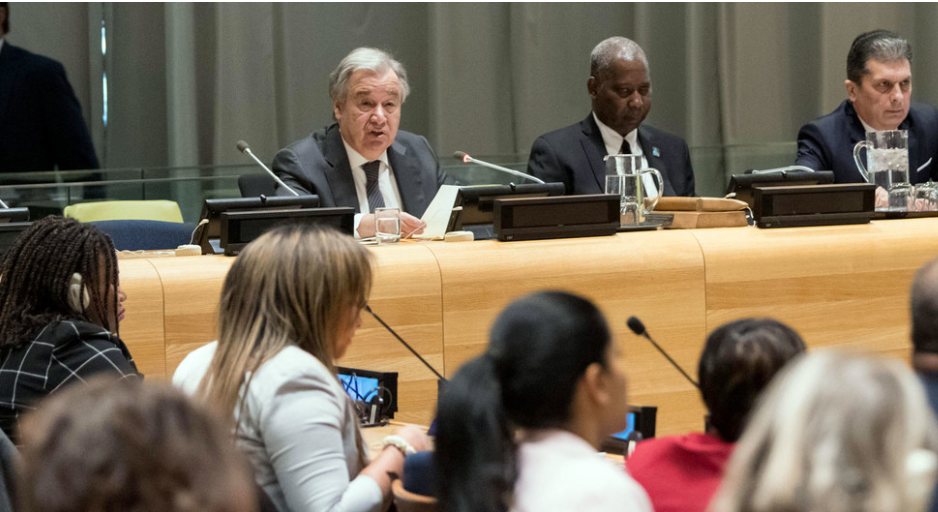 In a wide-ranging speech to the General Assembly, the UN chief outlined strategies to address what he called the “four horsemen in our midst”, and he urged countries to take advantage of the UN’s 75th anniversary year to secure a peaceful future for all people.

“These four horsemen…can jeopardize every aspect of our shared future”, Mr. Guterres warned.

For the Secretary-General, global tensions are at their highest level in years, making the risk of fracture real.

Although developments such as the formation of the Constitutional Committee in Syria and the recent Berlin conference on Libya are signs of hope, he stressed that “we have our work cut out for us”.

Mr. Guterres underlined the central role of prevention in UN engagement in the peace and security dimension, and emphasized the need to focus on the root causes of crisis and upheaval.

“We must strengthen our mediation capacity and our tools for sustaining peace, leading to long-term development”, he added.

“We need to create the conditions for effective peace enforcement and counter-terrorism operations by our regional partners, under chapter VII of the Charter and with predictable funding. This is especially true in Africa, from the Sahel to Lake Chad.”

Our planet is burning

On climate change, the science is clear, Mr. Guterres stated.

“Rising temperatures continue to melt records.  The past decade was the hottest on record.  Scientists tell us that ocean temperatures are now rising at the equivalent of five Hiroshima bombs a second.  One million species are in near-term danger of extinction. Our planet is burning”, he told ambassadors.

Yet, in the midst of the crisis, some leaders “continue to fiddle”, he said, as evidenced by the outcome of the last UN climate conference, known as COP25, held in Madrid in December.

But the Secretary-General is adamant that the climate battle can be won as people everywhere “get it”, while the overwhelming majority of scientists are clear there is still time to act.

“At the next climate conference - COP26 in Glasgow - governments must deliver the transformational change our world needs and that people demand, with much stronger ambition – ambition on mitigation, ambition on adaptation, and ambition on finance,” he stated.

A call for fair globalization

Back in 2015, world leaders adopted an agenda to bring about a more just and fair planet for all.  This year, the UN has launched a Decade of Action to achieve the Sustainable Development Goals (SDGs) by the 2030 deadline.

“Throughout the Decade of Action, we must invest in the eradication of poverty, in social protection, in health and fighting pandemics, in education, energy, water and sanitation, in sustainable transport and infrastructure and in internet access”, said the Secretary-General.

“We must improve governance, tackle illicit financial flows, stamp out corruption and develop effective, common sense and fair taxation systems. We must build economies for the future and ensure decent work for all, especially young people. And we must put a special focus on women and girls because it benefits us all.”

The Secretary-General also encouraged leaders to work to rebuild trust, including through listening to their citizens and harnessing ideas for change and other constructive solutions put forward by youth.

Taming the ‘Wild West of cyberspace’

Bringing light to the dark side of the digital world will require action on several fronts, including in the labour market as automation will displace tens of millions of jobs in the next decade.

The UN chief recommended that education systems be redesigned to address this reality by teaching people how to learn across the course of their entire lives.

“We also must usher in order to the Wild West of cyberspace,” he said.

“Terrorists, white supremacists and others who sow hate are exploiting the internet and social media. Bots are spreading disinformation, fueling polarization and undermining democracies. Next year, cybercrime will cost $6 trillion.”

Mr. Guterres highlighted the UN as the platform to bring together governments, the private sector, civil society and others to counter what he called “digital fragmentation” through global cooperation.

The “alarming possibilities” of artificial intelligence also must be addressed, and he appealed to countries to immediately ban lethal autonomous weapons, also known as killer robots.

“Lethal autonomous weapons - machines with the power to kill on their own, without human judgement and accountability - are bringing us into unacceptable moral and political territory”, he warned.