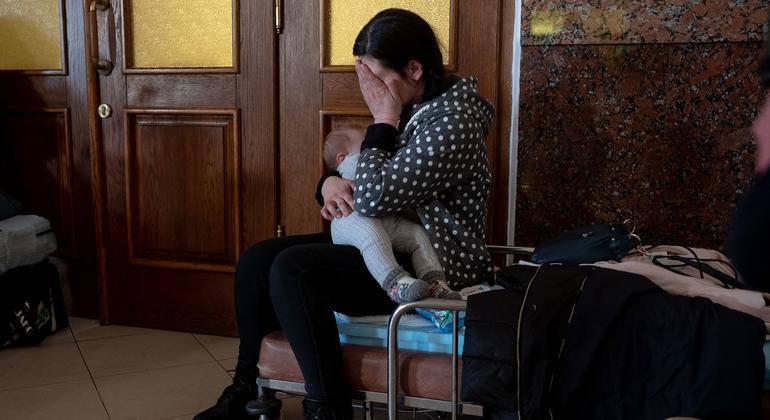 It’s time for a diplomatic solution to be found to end Russia’s invasion of Ukraine, amidst signs of hope that progress can be made to end an “unwinnable” and “indefensible” war, said the UN chief on Tuesday.

António Guterres briefed journalists outside the Security Council in New York, telling them from his own outreach efforts with “various actors”, “elements of diplomatic progress are coming into view on several key issues.”

‘Enough on the table’

He said there was “enough on the table” for an immediate ceasefire, and the start of serious talks to stop the slaughter in Ukrainian cities such a Mariupol.

“This war is unwinnable”, he said, in a stark message to Russia. “Sooner or later, it will have to move from the battlefield to the peace table. This is inevitable.

“The only question is: How many more lives must be lost?

He reminded that Russia launched its invasion a month ago, in violation of the UN Charter, after months of military buildup. Since then, it has inflicted “appalling human suffering and destruction in cities, towns and villages. Systematic bombardments that terrorized civilians. The shelling of hospitals, schools, apartment buildings and shelters.”

But the reality for Russia, he added, is that “the war is going nowhere, fast. For more than two weeks, Mariupol has been encircled by the Russian army and relentlessly bombed, shelled and attacked. For what? Even if Mariupol falls”, he warned, “Ukraine cannot be conquered city by city, street by street, house by house.

The only outcome would be more suffering, he said.

‘Time to end this absurd war’

“The Ukrainian people are enduring a living hell – and the reverberations are being felt worldwide with skyrocketing food, energy and fertilizer prices threatening to spiral into a global hunger crisis”, the UN chief added.

He repeated his concern that developing countries - after just a month of brutal fighting in one of the world’s grain producing breadbaskets, and already suffocating under the burden of COVID and inadequate financing - were already suffering economic shocks worldwide.

“What I said from this podium almost one month ago should be even more evident today. By any measure – by even the shrewdest calculation - it is time to stop the fighting and give peace a chance.

“It is time to end this absurd war.”

More than 3.5 million refugees have fled the country, UN humanitarians said on Tuesday, citing massive needs among the new arrivals.

“This is really another tragic milestone for the people of Ukraine and it’s been achieved in just under one month,” said Matthew Saltmarsh, spokesperson for the UN refugee agency, UNHCR.

Confirming UNHCR data, the World Health Organization’s (WHO) representative in Poland, Dr Paloma Cuchi said that Ukraine’s neighbour had welcomed “around two million people, this is about 61 per cent of the refugees are in Poland”.

About two-thirds of them said that they wanted to stay in Poland “because it’s close to home and they are thinking of going back if the situation permits”.

Amid ongoing reports that Russian shelling has continued to target heavily built-up areas inside Ukraine, latest WHO information confirmed 62 attacks on health care inside Ukraine since Russian forces invaded on 24 February.

A man removes debris around a residential building in Kyiv, Ukraine.

“As you can imagine access to health care in Ukraine is very restricted,” Dr Cuchi said. “And on top of that, refugees are coming from a long, difficult and dangerous journey, you know, until they arrive at the border of Poland.

Children are travelling for days without proper food, without the proper water. They are tired, they are worried.”

Many refugees also have chronic health care needs which require urgent assistance, as they can no longer be treated inside Ukraine because of the deadly threat of violence, the WHO official explained.

“There is a tremendous number of senior refugees…that have been without their medications for days, they come with decompensated diabetes, with blood pressure with other health problems, and of course, we have pregnant women, who are without prenatal care.”

“Some refugees with long-term, chronic, and rare diseases need to be referred immediately to trusted hospitals in Poland, the EU, or elsewhere where beds are available and receive treatment,” the UN agency noted.

Early WHO estimates indicate that the war has left 500,000 refugees with a mental disorder and around 30,000 with severe mental disorders, based on the experience of other conflict settings.

Inside Ukraine, where some 6.5 million people have been displaced internally, UNHCR responded to concerns that civilians from the shattered city of Mariupol had been transported to Russia against their will.

“Of course we’re aware of these reports, but we’re not in a position unfortunately to confirm anything,” said spokesperson Matthew Saltmarsh. “What we would say is that any transfer, movement of people, would have to be done voluntarily and in dignity…UNHCR has not been involved in the negotiations of safe passage for civilians.”