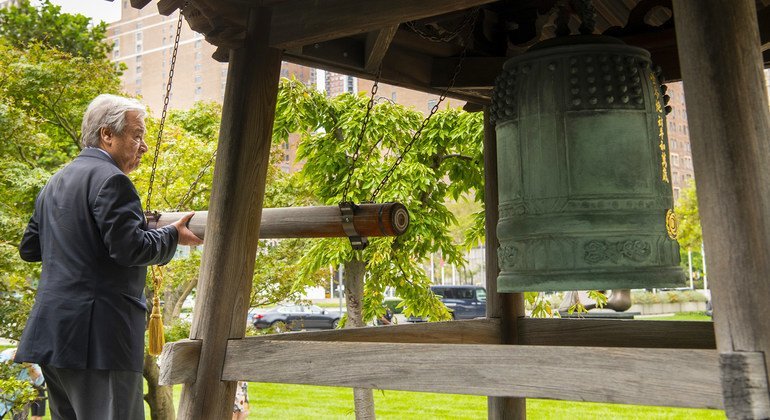 A Japanese principle that finds beauty in broken things, should serve as guidance for today’s fractured world as we navigate out of the COVID-19 pandemic, Secretary-General António Guterres said on Thursday during the annual ceremony at UN Headquarters to mark the International Day of Peace on 21 September.

Speaking in front of the Japanese Peace Bell on the grounds of the UN Secretariat, Mr. Guterres outlined how the coronavirus is putting peace at risk, prompting him in March to appeal for a global ceasefire shortly after the pandemic was declared.

“Beyond war zones, the pandemic is highlighting and exploiting inequalities of all kinds, setting communities and countries against each other,” he stated.

Prior to ringing the bell, the Secretary-General called for a minute of silence for victims of war and conflict around the world.

An ‘annual moment of calm’

For the UN chief, the Peace Bell Ceremony is “an annual moment of calm” before the high-level segment of the UN General Assembly, which begins next week, in unprecedented circumstances, without the usual teeming corridors and packed conference halls.

During the largely virtual General Debate, Mr. Guterres will repeat his call for the global ceasefire, stating, “We need to silence the guns and focus on our common enemy: the virus.”

The pandemic is unfolding in the year the UN turns 75, and Thursday's ceremony also provided a moment to reflect on the Organization’s founding goal of preventing war and promoting peace.

The Secretary-General described the Peace Bell as a symbol of unity, cast from coins and medals donated by people all over the world.  It was gifted to the UN by Japan in 1954.

Mr. Guterres noted that Japanese culture has a deep appreciation for natural imperfections and flaws, as reflected in an art form known as kintsugi, which takes broken pieces of pottery and fuses them together using golden lacquer.

“The result is a piece that is not ‘good as new', but ‘better than new’. As we mark the International Day of Peace, let’s apply this principle to our fractured world,” he said.

“Let’s address the fragilities and inequalities that work against peace, so that we emerge from the crisis stronger than before.   Let’s push for peace wherever conflict is raging and wherever there are diplomatic opportunities to silence the guns.  Let’s prioritize peace and build a safer future for all.”

The Peace Bell ceremony was beamed globally via live feed, with the UN chief and the new UN General Assembly President, Volkan Bozkir of Turkey, standing at appropriately distanced podiums, in line with COVID-19 measures.

Mr. Bozkir said the pandemic has threatened health, security and the way of life of people everywhere.

“Today we stand separated and masked. The pandemic has brought unexpected levels of misery and hardship to many. But it is the most vulnerable who suffer most, and are still suffering, both in conflict, and at the hands of this disease”, he said.

Under normal conditions, UN Messengers of Peace, such as the renowned American cellist Yo-Yo Ma, would travel to New York to take part in the Peace Bell ceremony.

Mr. Ma participated virtually in this year's commemoration, as did Jane Goodall, the British primatologist famous for her pioneering research on chimpanzees.

Prior to the official ceremony, the two UN Messengers of Peace participated in a student observance of the International Day,  held online. Their colleagues -- violinist Midori, conductor Daniel Barenboim, and Paulo Coelho, author of ‘The Alchemist’ -- provided inspirational video messages.

Ms. Goodall was adamant that the world will get through the pandemic. “But when we get through it, we must get together as a human family,” she advised. “We must set aside differences between nations, religions, cultures, to tackle a far greater threat, which is the climate crisis.”

Mr. Ma spoke of the need to build trust between the various generations as a means to achieve peace.

“Intergenerational exchange is incredibly important,” he told the young audience.  “It’s your world, and we need to hand you over as best a world as we can, and trust that you are going to be the great stewards over the next half century.”