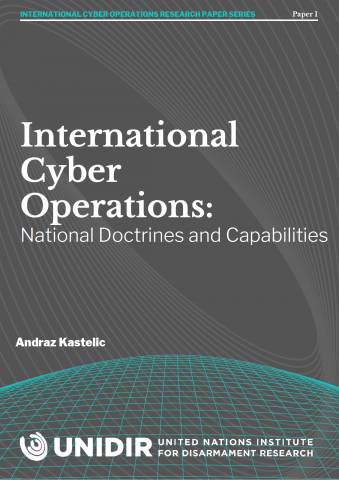 The number of States possessing the capability to conduct international cyber operations against or through foreign information and communications technology (ICT) infrastructure is on the rise. These cyber operations can signal a mounting large-scale threat to the security of a State, could be understood as a violation of sovereignty and may lead to an escalation.

To facilitate transparency, advance trust among States and thus promote stability in international cyberspace, the UNIDIR Security and Technology Programme commissioned a series of research papers outlining national capabilities to conduct international cyber operations and relevant national doctrines regulating the conduct of such operations. In the resulting papers, nine scholars and practitioners provide an overview of capabilities and doctrines pertaining to 15 countries across different regions: Australia, Brazil, Canada, China, France, Germany, India, the Islamic Republic of Iran, Israel, Japan, the Republic of Korea, the Russian Federation, Saudi Arabia, the United Kingdom of Great Britain and Northern Ireland, and the United States of America.

This paper serves as an introduction to the series. It offers contextual background, defines some of the key concepts and sets the methodological boundaries of the series.

The Cyber Operations Strategies of the United States and Canadian Governments: A Comparative Analysis