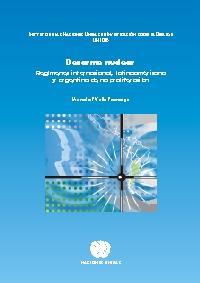 This volume is an analysis of nuclear weapons control, disarmament and nonproliferation regimes at the international, regional, sub-regional and national levels. It presents the example of the Argentine Republic, a country that, in the first five years of the 1990s, joined no less than twelve disarmament and non-proliferation regimes. Argentina also agreed to on-site verification and inspection mechanisms with its neighbour, Brazil, and implemented export controls on all nuclear materials and on all sensitive or dual-use equipment.

The publication provides a particular focus on the bilateral relationship with Brazil in nuclear matters. The Brazilian-Argentine system of nuclear controls is considered a model of non-proliferation for other regions of the world.

This study also evaluates the costs and benefits of nuclear regimes in the post-Cold War era on the basis of their impact on national, regional and international security in the context of an increasingly interdependent world.