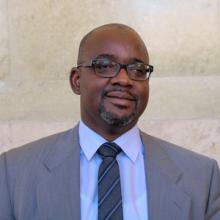 Mohamed is a non-resident Researcher for the Conventional Arms and Ammunition Programme at UNIDIR. Mohamed assists in baseline weapons and ammunition management assessments in the African region and develops partnerships with African regional organisations. Prior to his work with UNIDIR, Mohamed worked with UNDP, UNREC, ECOWAS, and OXFAM. He has degrees in Economics from the Université de Reims Champagne-Ardenne and the Ecole Nationale D'Administration, France. He speaks English and French.