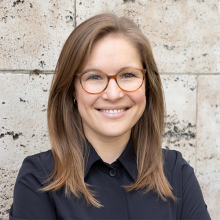 Johanna is an Associate Political Affairs Officer in the Office of the Directorate.

Prior to joining UNIDIR, Johanna was an advisor with the Bonn International Centre for Conflict Studies (BICC) where together with regional organizations in Sub-Saharan Africa she focused on policies and practices in weapons and ammunition management. With other think tanks she worked on civilian stabilization and crisis prevention as well as supported strategic business development and resource mobilization.