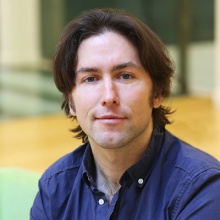 Dr Asa Cusack is a digital communications specialist at UNIDIR. He is responsible for using digital media to build awareness of and engagement with the Institute’s research and activities amongst key audiences.

Prior to joining UNIDIR, he was responsible for establishing the digital communications presence of the LSE Latin America and Caribbean Centre and editing its academic blog. He has also held digital communications and research positions at the Centre for Latin American Studies and on the ERC-funded Economics in the Public Sphere project at University College London. He holds a PhD in Latin American and Caribbean Political Economy and a master’s in Politics and International Relations from the University of Sheffield (UK), as well as a bachelor's degree in American Studies from the University of Hull (UK).

Asa has contributed to various print, digital and broadcast media on Venezuelan and Latin American politics (including CNN, the BBC, Al Jazeera, Sky News, France 24, The Guardian and The Daily Telegraph). He has also observed elections in Latin America, Africa, Europe, and Asia for the European Union and the Organization for Security and Cooperation in Europe (OSCE). He speaks English, Spanish and French.