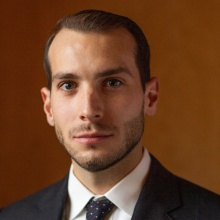 Alfredo Malaret Baldo is a Researcher with UNIDIR’s Conventional Arms Programme. He coordinates the Urban Violence research portfolio. Alfredo specializes in public policy analysis, armed violence reduction strategies, and linkages between security and development efforts. Alfredo joined UNIDIR after working for the Stockholm International Peace Research Institute, the United Nations Regional Centre for Peace, Disarmament and Development in Latin America and the Caribbean, and for Ret. US Ambassador Dennis Jett. He has a bachelor’s degree in Political Science and masters’ degrees in Public Affairs from Brown University and International Affairs and Economic Development from The Pennsylvania State University. During his time at UNIDIR, Alfredo has co-authored the Counter-IED Self-Assessment Tool, the Handbook to Profile Small Arms Ammunition in Armed Violence Settings, and the Menu of Indicators to Measure the Reverberating Effects on Civilians from the Use of Explosive Weapons.  He speaks English and Spanish.