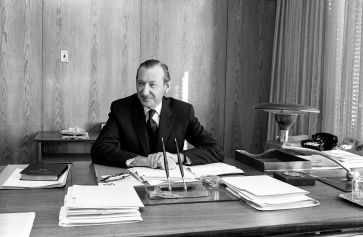 Pursuant to the request contained in resolution 3263 on the “Establishment of a nuclear-weapon-free zone in the region of the Middle East”, the UN Secretary-General invited 15 Middle Eastern states - Bahrain, Democratic Yemen, Egypt, Iran, Iraq, Israel, Jordan, Kuwait, Lebanon, Oman, Qatar, Saudi Arabia, Syrian Arab Republic, United Arab Emirates and Yemen - to communicate to him their views on the implementation of the resolution. The report submitted by the Secretary-General in 1975 included responses from Egypt, Iran, Iraq, Kuwait, Oman, Qatar, Lebanon, Jordan, Bahrain, and Israel. All Arab states stated their readiness to refrain from producing, testing and acquiring nuclear weapons, provided that all countries in the region undertook similar commitments. With regard to the NPT, some governments pointed out that they were already party to the treaty, while others indicated that they had signed and would ratify it once Israel joins the NPT. Israel, in its reply to the Secretary General, said that a nuclear-weapon-free zone “would be a desirable further step towards a just and durable peace in the region, in light of the new climate created by the recent agreement between Israel and Egypt.” Egypt, in a response letter (also included in the report), rejected Israel’s position that “negotiations between the States of the region should be the only means by which a nuclear-weapon-free zone could be established” as a precondition and excuse not to sign the NPT.