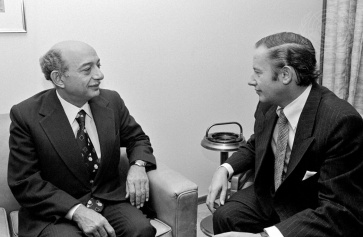 In its resolution 3178, the LAS endorsed the proposals by the Egyptian foreign minister and the memo by the Syrian Arab Republic on the establishment of a nuclear-weapon-free zone in the Middle East and to request including it as an agenda item at the 29th session of the UN General Assembly.

Mahmoud Riad (left), Secretary-General of the League of Arab States, is seen as he met with Gaston Thorn (Luxembourg), President of the Thirtieth session of the General Assembly. September 24, 1975