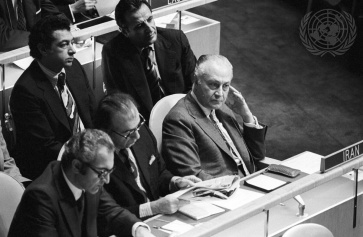 Iran’s request to the United Nations General Assembly was preceded by several efforts toward this goal, including a statement by the Shah of Iran in 1969 calling for the creation of a Middle East nuclear-free zone as well as statements made by Iranian foreign ministers at the UNGA in 1970 and 1971.

The draft resolution, co-sponsored by Iran and Egypt, was adopted as Resolution 3263 considered it was “indispensable that all parties concerned in the area proclaim solemnly and immediately their intention to refrain, on a reciprocal basis, from producing, testing, obtaining, acquiring or in any other way possessing nuclear weapons”. Additionally, the resolution called on the states in the region to accede to the NPT and requested that the Secretary-General “ascertain the views of the parties concerned” with respect to implementation of the resolution. 125 states voted in favour of the resolution, none opposed it and two states – Israel and Burma – abstained.

The delegation of Iran at the 1972 UN General Assembly. Pictured are Abbas Ali Khalatbari (right), Minister for Foreign Affairs, and Fereydoun Hoveyda, Permanent Representative to the UN. September 25, 1972