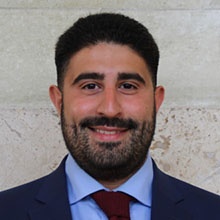 Dr. Farzan Sabet is a Researcher in the Middle East WMD-Free Zone Project at the United Nations Institute for Disarmament Research. He was previously a Postdoctoral Fellow at the Global Governance Centre of the Graduate Institute Geneva, a Nuclear Security Predoctoral Fellow at the Centre for International Security and Cooperation at Stanford University, and a Visiting Fellow in the Department of Government at Georgetown University. Farzan holds a Ph.D and M.A. in International History from the Graduate Institute Geneva and a B.A. in History and Political Science from McGill University.

Chen Zak and Farzan Sabet. [eds] 2021. “From the Iran nuclear deal to a Middle East Zone? Lessons from the JCPOA for an ME WMDFZ”, Geneva, Switzerland: UNIDIR.

Chen Zak and Farzan Sabet, “Introduction”, in From the Iran nuclear deal to a Middle East Zone? Lessons from the JCPOA for an ME WMDFZ.

Grégoire Mallard and Farzan Sabet, “Compliance and Enforcement”, in From the Iran nuclear deal to a Middle East Zone? Lessons from the JCPOA for an ME WMDFZ.

Farzan Sabet. “How the Assassination of an Iranian Scientist Could Affect Nuclear Negotiations with Iran.” The Washington Post, 11 Dec. 2020.

Farzan Sabet, “Sleeping beside the Elephant: The United States in Canada’s Middle East Policy.” In Middle Power in the Middle East: Canada’s Foreign and Defence Policies in a Changing Region, edited by Thomas Juneau and Bessma Momani, University of Toronto Press, 2022, pp. 14-30.

Grégoire Mallard, Farzan Sabet, and Jin Sun. “The Humanitarian Gap in the Global Sanctions Regime.” Global Governance: A Review of Multilateralism and International Organizations, vol. 26, no. 1, 2020, pp. 121–153. (The co-authors are the winners of the Swiss Network for International Studies (SNIS) International Geneva Award 2020.)