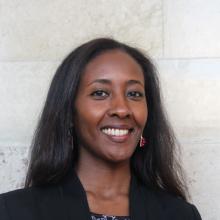 Einas is a Researcher in the Conventional Arms Programme at UNIDIR. She joined UNIDIR after nine years of working on defense and security affairs at the African Union (AU). During her career, she spearheaded several projects on inter-African cooperation in mine action, improving management of recovered arms in AU Peace Support Operations and ammunition safety management. She also worked extensively on promoting the implementation of the African Nuclear-Weapon-Free Zone Treaty and UN Security Council resolution 1540 (2004). Einas holds a master’s degree in international relations from the Free University of Berlin and a post-graduate diploma in Human Rights Law from the University of Khartoum. She speaks Arabic and English.