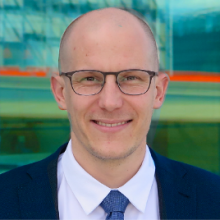 Tobias Vestner is a Non-resident Fellow. He is Head of the Security and Law Programme at the Geneva Centre for Security Policy (GCSP), where he teaches, researches, and organizes dialogue on the nexus between security policy and international law.

Disarmament, arms control, and non-proliferation are a core focus of Tobias Vestner’s work. He has initiated and teaches in a new executive education course on international disarmament law. He has published ’A Guide to International Disarmament Law’ (Routledge, 2019) with Stuart Casey-Maslen and further research on disarmament and weapons-related issues. He has also co-developed the DisarmApp, a web-based digital platform on existing disarmament and disarmament-related instruments. His current research focusses on trends in disarmament treaties, the dynamics and legal implications of multilateral disarmament processes, and emerging technologies’ compliance with international law.

Tobias Vestner is also an Honorary Senior Research Fellow at Exeter University and a Fellow at the Supreme Headquarters Allied Powers Europe (NATO). A former reserve member of the Swiss Special Forces Command, he serves as reserve Legal Advisor at the Swiss Armed Forces Staff. He is member of the Board of Directors of the International Society for Military Law and the Law of War (ISMLLW) and member of the International Institute of Humanitarian Law (IIHL). Tobias Vestner was Research Affiliate and Global Futures Fellow at Georgetown University. Prior to that, he was Policy Advisor at the Swiss State Secretariat for Economic Affairs, where he managed political processes with regard to the export of conventional weapons and participated in the UN negotiations of the Arms Trade Treaty. Previously, while at the Law of Armed Conflict Section at the Swiss Federal Department of Defence, Civil Protection and Sports, he contributed to bilateral negotiations on military cooperation, and trained military officers in international humanitarian law.