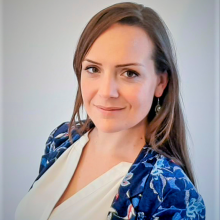 Pauline is a non-resident fellow at UNIDIR. She holds a master in law and an advanced master in human rights. She joined the armed forces and served in the International and Humanitarian Law Unit of the Belgian Ministry of Defence from 2013-2020 where she was notably in charge of the legal review of new weapons. Pauline was deployed as a military legal advisor on three occasions in multilateral operations. Since 2014, she is involved in the GGE on LAWS discussions and co-authored lately the book “Robotisation des Armées : enjeux militaires, éthiques et légaux”, published by Economica in 2020. Among her academic activities, Pauline taught disarmament law and IHL at the Royal Military Academy (2017-2020) and serves as IHL assistant at the Faculty of Law of the University of Namur (Belgium). Pauline speaks French, English, Dutch and German.