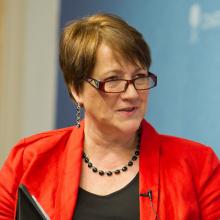 Dr Patricia M. Lewis is the Research Director, International Security at Chatham House in London. Her former posts include: Deputy Director and Scientist-in-Residence at the Center for Nonproliferation Studies at the Monterey Institute of International Studies; Director of the United Nations Institute for Disarmament Research (UNIDIR); and Director of VERTIC in London.

Dr Lewis served on the 2004-6 WMD Commission, chaired by Dr Hans Blix, the 2010-2011 Advisory Panel on Future Priorities of the OPCW, chaired by Ambassador Rolf Ekeus, and was Senior Advisor to the 2008-10 International Commission on Nuclear Non-proliferation and Disarmament (ICNND) chaired by Gareth Evans and Yoriko Kawaguchi. She was a Commissioner on the 2014-2016 Global Commission on Internet Governance chaired by Carl Bildt and is on the EEAS Space Advisory Board as a Senior Space Advisor to the EU Special Envoy for Space. Dr Lewis publishes widely on all aspects of international security including: chemical, biological, radiological and nuclear weapons; conventional forces; cyber security; space security; internet governance; terrorism; and conflict prevention.

She holds a BSc (Hons) in physics from Manchester University, a PhD in nuclear physics from Birmingham University and an Honorary Doctor of Laws from the University of Warwick. She is a dual national of the UK and Ireland. Dr Lewis is the recipient of the American Physical Society’s 2009 Joseph A. Burton Forum Award recognizing "outstanding contributions to the public understanding or resolution of issues involving the interface of physics and society."