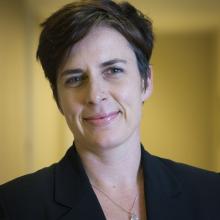 Kobi is a Non-resident Fellow. She is a Senior Research Fellow in Digital Ethics in the School of Engineering, and an Honorary Senior Fellow in the School of Law, both with the University of Melbourne. Leins has managed programs and teams in the areas of administrative law & justice, humanitarian law, human rights law, and disarmament with the United Nations and the International Committee of the Red Cross. In 2006, Leins worked with the International Service for Human Rights in New York to advocate for the adoption of the Declaration on the Rights of Indigenous Peoples, after which she worked for the United Nations Secretariat. In 2005, she liaised with States, scientists and stakeholders to raise awareness of, and compliance with, the Biological Weapons and Chemical Weapons Conventions. In 2004, Leins worked as a Legal Officer at the United Nations Compensation Commission in Geneva under the auspices of a Security Council Resolution analysing and presenting claims for environmental damage following Iraq's invasion of Kuwait in 1991, having escaped commercial law to do so. Leins also prepared a matrix for review of domestic compliance with the Chemical Weapons Convention, which many States adopted. Leins has submitted her PhD with the University of Melbourne on whether the use of nanotechnology enhanced or based weapons is prohibited or limited in an armed conflict.