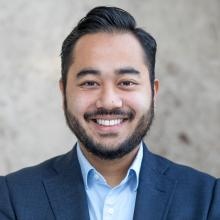 Himayu Shiotani is the Head of International Policy at the Conflict Armament Research. Prior to this, Himayu was the Programme Head of the Conventional Arms Programme at the United Nations Institute for Disarmament Research (UNIDIR). Himayu specializes in research strategy and policy advisory on conventional weapons to promote knowledge on the regulation of the global arms trade, armed violence reduction, explosive hazard risk mitigation, and weapon and ammunition management in West and Central Africa, as well as in Iraq and Somalia. Prior to his work with UNIDIR, he was a Research Associate at the James Martin Center for Nonproliferation Studies (CNS) in Monterey, California. He holds a Master’s degree in International Policy Studies, with a Certificate in Nonproliferation Studies, from the Middlebury Institute of International Studies. He speaks English, Japanese and Hindi. Himayu’s areas of expertise include: International security and disarmament, weapon and ammunition management, regulation of global arms trade, conflict prevention and management, armed violence reduction, counter-terrorism, explosive hazard risk mitigation, and sanctions.