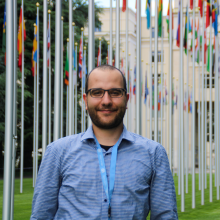 Nicolas is a graduate professional in the strategic communications team. He manages UNIDIR's website and social media to promote its publications and activities. Previously, Nicolas interned at UNODA's Regional Centre for Peace and Disarmament in Asia and the Pacific (UNRCPD) where he supported the conventional arms and peace & disarmament education (PDE) programmes. Nicolas holds a Master's degree in international studies from Laval University in Quebec, Canada. His areas of interest include PDE, military and security confidence-building measures, as well as conflicts and security issues in Asia - particularly in the Himalayas. Nicolas speaks English, French, Spanish, Tibetan, and he is currently learning Mandarin Chinese.