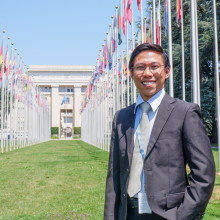 Joshua is a Graduate Professional in the Conventional Arms and Ammunition Programme (CAAP).

Before joining UNIDIR, Joshua worked in various Philippine government agencies. Most notably, he worked as a Communications Associate in a conflict area in Southern Philippines after a city-wide siege of an armed group. As a Research Fellow in the private sector, he has led studies for Oxfam Pilipinas, Greenpeace Southeast Asia, and other civil society organisations.

Joshua holds a joint master's degree in International Development from Palacký University Olomouc in the Czech Republic, Université Clermont Auvergne in France, and Università degli Studi di Pavia in Italy. He previously completed a bachelor's degree in Development Studies from the University of the Philippines Manila. He speaks Tagalog and English.